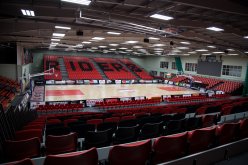 Players like it; coaches like it; and the spectators like it – the innovative approach to lighting the playing area at the new home of Leicester Riders basketball team has helped create a great venue for club and community.

That’s the view of Leicester Riders’ Chairman Kevin Routledge, who also headed up the project team for the creation of the new 2,400 seat Leicester Community Sports Arena venue. He said that people visiting and using the new venue in Charter Street, Leicester, were ‘blown away’ by the facilities.

“It is a community project and 80% of the time it’s going to be used for the community,” he said. “Riders are a very important element of it.”

“This community venue brings together under one roof, the participation, talent and elite programmes, male and female, of the Riders. Its also the first time we’ve had a permanent home and been able to train and play on the same playing area. That makes a big difference to performance.

“A big part of our new home is how people view the games played here and how the players like the lighting set up. The new approach to lighting the playing area is a great success,” he said.

As well as being home to Riders and Leicester Cobras Wheelchair Basketball Club, the community venue will also become a regional ‘centre of excellence’ for the sport. It will also serve as Leicester College’s sport teaching and learning facility, and as a large multi-use sports venue for the local community.

LED Light Vision is the LED lighting solutions company brought into the new build project because the designers and main contractors wanted a company with the capability to provide design and installation solutions using high quality LED luminaires, controls and ancillary items.

“We were offered a concept not used before for professional basketball in the UK, one which provided for an advanced lighting and control system. In fact, as far as I am aware, it hadn’t been used before in Europe for professional basketball. Its an Indirect LED lighting system without glare and flicker. It will set the standard for future indoor arena lighting standards,” explained Routledge.

The glare-free and high efficiency system provides a uniform light level across large spaces and is ideal for sports arenas, warehouses, superstores, large factories and airports. The light body is constructed of aluminium and a light’s lifespan is sub 50,000 hours and more.

It also provides higher LUX lighting levels. For arenas such as the new facility in Leicester, the LUX levels normally required for televised basketball games is 1500lux; the system provides an average of some 2200lux on the Show Court for TV games.

LED Light Vision Operations Director Scott Williams explained: “Energy costs were high on the list of requirements with a full control system in place. This enables the lights to be used in areas where they’re only needed. That gives additional savings and reduces running costs – against traditional lighting systems – by up to 70%.

The office, toilets and reception area lighting solution was a slim and simple design; polycarbonate body and cover-diffuser recessed into the ceilings.

A special feature of the project – just for the Riders – was washing of the outside of the building using a red LED.